Now Picture This: Three adults, a twelve year old, a dog and a weeks worth of goodies crammed into the cab of a Ford F350. Yes there was an extended cab and no the horses were not in there with us but boy was it snug. Now the trailer had the three angry beasts and a bunch of supplies making us about the size of a semi truck when it came to moving around and parking.

The Drive to Colby, Kansas

This was an all night ordeal that started around 12AM with going to the barn and loading the horses. Poor Mike was caught up in the best when Lefty starting running around in the round pen and startled Boston just enough to drag him about fifty feet. That was the perfect start to the 12 hours of driving lying ahead.

We finally arrived in Kansas at the horsey bed and breakfast around early afternoon. There were horses everywhere, but I saw the baby horses heaven set in.

My little buddy was the pitch black baby girl who never nibbled and would just stand there and absorb the attention. He mom was a beautiful dark brown color and she was so black that her dad must be quite a stud. You can see her in the picture above on the left side. What a cutie!

Below you can see me with one of the other foals who decided I knew how to scratch pretty well. By the end of the trip I was horse scratcher extraordinaire. 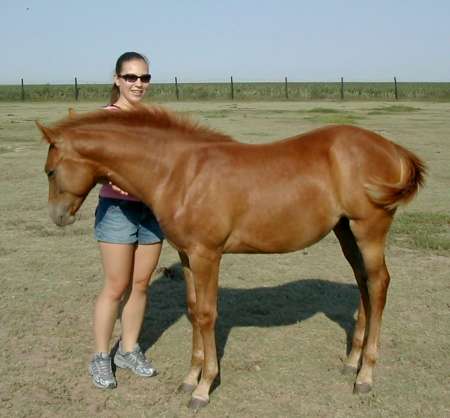 This was a fast six hour drive that allowed us to relax and stretch ourselves out before the long week of riding ahead. Due to the fact that I’m a complete beginner the soreness level was quite high the first couple of rides. 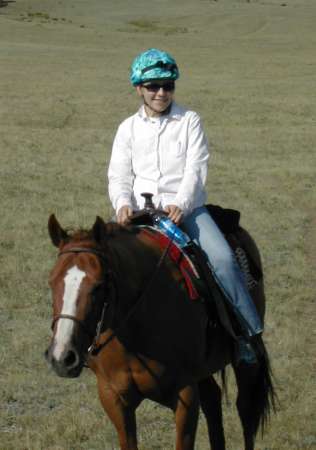 The first ride was an all good intended one with an extra loaned horses from the ranch which was suppose to be a trail horse. I was quite surprised when he didn’t know how to stay on the trail given his slow and beginner like nature. That was quite frustrating so the wee one (Kaitlin) and I traded horses and I got to ride Annie. Here I am riding Annie – one of the sweetest quarter horses I’ve ever met.

Another adventurous trail ride was with Chris, Kaitlin and I at Mount Margaret. This was an amazingly level trail through mountain meadows with incredible scenic views. 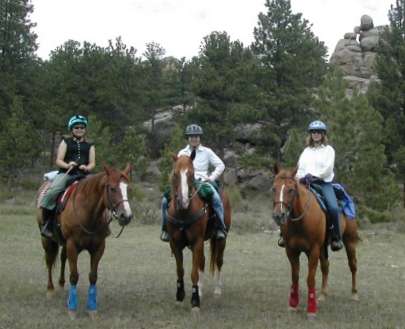 This was a fun ride but given my experience level, when we were cantering and Boston decided to catch up to Lefty and run full speed I was taken by surprise. There is nothing like a really tall horse with a really short lady going about thirty miles per hour on a dirt road. Boy was that scary! Now don’t think that Boston is a mean boy or anything, he was just having fun. 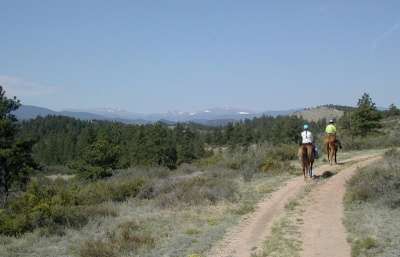 There were several other wonderful rides that we went on and I enjoyed very much. There were cows and aspen trees all over the government land and the views of the Rockies were priceless. In the picture above you can see us riding along a mountain ridge that gave us nice views of the Mummy range in Rocky Mountain National Park. 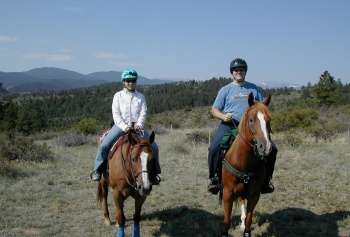 Overall the trip was wonderful and the drive home was much easier on our bodies. Thanks to the wonderful planning of Chris and Mike the Colorado trip was a success and I’d do it all over again! Thank you to both of them! 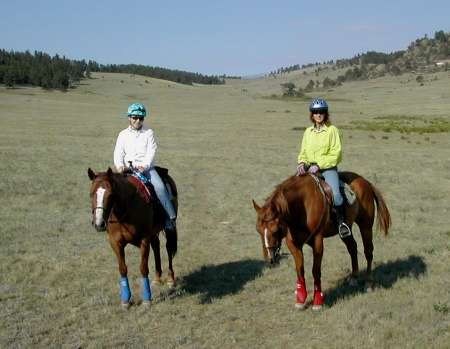