Farrier Day at my barn is normally an assembly line of quiet quarter horses standing patiently as they get their manicures at the horsey day spa. I’m fortunate that they all have great feet, so standard shoeing is all they need. My education in horseshoeing and hoof problems increased dramatically recently with the introduction of a new horse who had less than spectacular feet and required special shoeing techniques.

For this story I’ll call the horse Moose (although that his not his name it gives you an idea of his size). He’s a lovely 17.2 hand warmblood – Oldenberg – Thoroughbred cross. Here’s a picture of him from a few years ago. 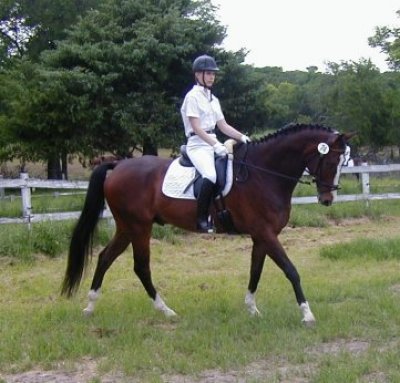 I received a call this summer from a friend who had to travel extensively for her job. She had a warmblood that was trained to second level dressage who needed a home fast. She’d had the guy since he was a baby so she was more interested in finding a good home than anything. I wasn’t in the market for a horse but after a couple of long discussions I agreed to try the horse out to see if I would use him. My friend didn’t want any money for him, just a good home.

When I went to pick him up, Moose was limping. His immediate history was unclear due to my friend and the girl taking care of him not being on speaking terms. His feet looked in bad shape and he appeared to tiptoe when he walked: he was in pain.

Before I even made it back to my barn I was making arrangements to have my farrier come out – I could almost feel the horse’s pain when he walked and I wanted to get him comfortable as soon as possible. As I suspected, he had a bad stone bruise and his feet were a mess.

When my farrier arrived I felt like I was back in school. I learned a lot about the differences in different breeds of horses’ feet that day. For instance, did you know that many thoroughbred horses have really thin soles which can make them tender footed? Did you know that draft horses tend to have flat feet where as Arabs tend to have very concave soles? I have to admit, I was spoiled by my rock solid quarter horses’ feet (who can even go barefoot when I’m not riding on rocky trails).

The biggest lesson of the day for me was that special shoeing costs nearly 4x what regular shoeing costs. That was an eye opener. 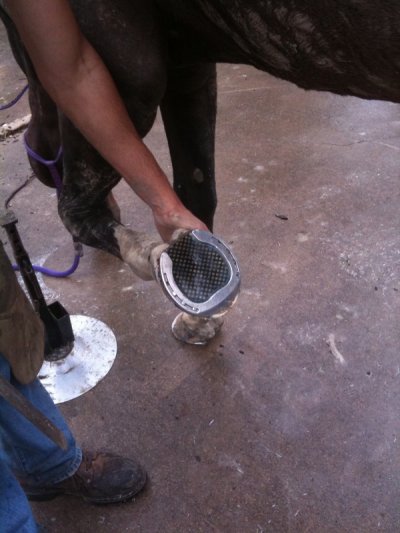 Due to the poor condition of the Moose’s foot and the sensitivity of his foot, the farrier recommended I put pads on both the front feet. From his thoroughbred side Moose had inherited extremely thin soles. Combine his thin flat soles with some prior poor shoeing which left him with no heels resulted in the poor horse’s sensitive sole touching the ground causing him a lot of pain. The pads would protect his sole and support his hoof so he would be more comfortable while the hoof grew out for retrimming.

The farrier first put on a black mesh pad (Equi-mesh) between the hoof and the new shoe. You can see it above. Please note that this picture was taken on shoeing session number three when the hoof has already improved dramatically. It still needs the pad to ride, but the hoof has improved a lot in the last three months.

The next thing my farrier did was to place a temporary adhesive foam pad on the bottom of the hoof to seal and support the pad as it is being created. He then injected a silicone hoof pack directly into the hoof area to create the pad. The idea is that the pad provides support for thin-soled, flat-footed horses – which Moose most certainly was. The farrier used a caulking gun to inject the silicone. 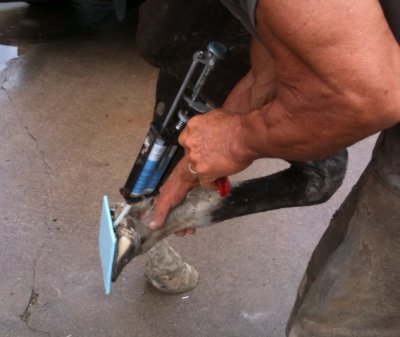 The pad set up in just a couple of minutes and the farrier removed the bottom foam pad.

During the initial shoeing my farrier was concerned that due to the horse’s weak hoof condition and prolapsed soles that one of the shoes wouldn’t stay on without a cast. I had not heard of this technique but basically the farrier wraps a special tape over the newly shoed hoof and the cast acts to protect the hoof and shoe. The tape is very similar to the kind of tapes they would put on your arm if you broke it where the tape hardens and creates a cast. In this case, the cast is over the hoof. My farrier mentioned that he has also used this on barefoot horses that need some temporary support.

The cast lasted about four weeks and then it tore off. I put an easy boot on the horse until the farrier could get back out to my barn and redo the casting. He warned me that the casting would probably not last the full six weeks and to be on the lookout for it tearing. The farrier also had me keep bell boots on his feet all the time – even in pasture – to ensure he didn’t accidentally overreach and pull off the whole pad-shoe arrangement.

Something else I learned that day was about the different type of horse shoes. My quarter horses all use steel horse shoes, but since Moose was a warmblood whose main job was dressage being light on his feet was important, so for that reason my farrier recommended aluminum shoes. 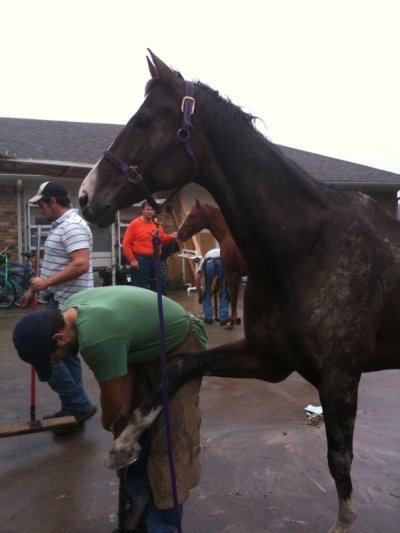 Since Moose’s feet were in such bad shape, I also started him on a biotin/zinc/methionine supplement. I knew it takes about a year for the whole new hoof to grow out and that it would be months before I could really see a difference in Moose’s feet, but I’m a big believer in the wonders of Biotin on a horse with bad feet.

As the saying goes, No Foot, No Horse. Some horses aren’t blessed with good feet. Due to bad genetics or bad conditions some horses need a little more help than others to stay sound. My lovely warmblood is a joy to ride, but his feet… well, lets just leave it that he’s a joy to ride.

Having Moose enter my life has made me more interested in horses hoof care and corrective shoeing. Some of the books I’ve been reading are listed below. I included Pete Remey’s book on going barefoot because that is very popular in some horse circles. I tried having several horses go barefoot with mixed results. With some horses, it was great, with others their feet didn’t do well and I had to go back to shoes. In any case, being informed is your best insurance in keeping your horses feet sound.