This is follow-on to my earlier article on senior horse care. A few more years have passed and with it a few more developments – an eye injury and a worsening of my older horse’s arthritis, but to balance it we have also been experimenting with some new joint treatments.
You can see a picture of my 30 year old Quarter horse mare below. 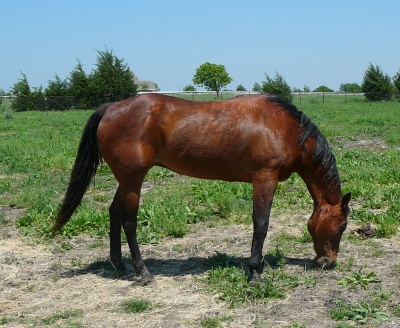 My mare still has good days and age has not diminished her appetite. We do have to give her more medications than the other horses, but overall her quality of life is good. Obviously I can’t ride her anymore, but she’s a long time friend and companion. In the picture below you can see some of the arsenal of horse medicines I keep around to keep her comfortable. We keep our horses on pasture as much as we can. I feel that is a more natural existence and they seem happier when they can graze freely.

I also think that pasture encourages an arthritic horse to stay active which is important for general circulation as well as mental activity. The times when I have had to stall my horses they get “antsy” to be free or act depressed (my older mare will actually hang her head in the corner and pout when I stall her for more than a few days. Maybe I’m anthropomorphizing, but her entire demeanor changes if she is stalled.

So while being on pasture is mostly a good practice, it also means the horses have more ways they can injure themselves. In the past year, my older mare turned 30 and has a successive number of injuries.

When you have a horse herd and one member doesn’t show up for dinner, your mind immediately starts to conjure up the worst. I set out for the back pasture where the horses often gather in the afternoon in the shade of some large trees.

Part way to the back pasture I could see a dark form laying in the grass. I think the scariest part was her head was down too so I wasn’t sure if she was alive or dead and I was too far to see if her chest was breathing. As I ran to get closer to her faster, her head popped up. Okay, so she wasn’t dead, but this was a horse who lives to eat. I knew there had to be a problem for her not to come to the barn.

By the time I got to her side, she was struggling to get up. I immediately noticed swelling in her right front fetlock. I haltered her and then we slowly hobbled our way to the barn. I fed her and started cold water hosing on the leg. We continued the hosing twice a day for a couple of days. Usually minor swelling responds well to the cold water hosing, but this one didn’t.

Because she could barely walk, I had to put her back in a separate pasture. I could tell she was hurting because she spent a lot of her time laying in the deep shavings in her stall (she has access to her stall from her pasture).

Finally, when we didn’t see the swelling going down after a few days, we loaded her up and took her to the vet. Our vet is very up on the care of arthritic horses – guess people like me give her a lot of practice. She x-rayed my horse’s leg and saw a lot of scar tissue and a badly degenerated joint.

She recommended we try some new treatments. She prescribed a topical anti-inflammatory cream called SURPASS. I had never heard of it, but it is similar to a human using Aspercreme on sore muscles. The vet told us that we had to wear gloves when we applied the SURPASS because it had the potential to penetrate our skin as we put it on. I do feel the cream helped. After using it for several days my horse’s swelling was down and my horse did seem to move around a bit better. I would call my horse’s arthritis severe, so I don’t expect miracles, but the cream did seem to help her move around better so it was worth using. In fact I think I’ll keep a tube of it handy for days when she’s having problems. It is a fairly new product so I don’t know of any testing where they have used it for long periods of time, but since its topical there shouldn’t be problems with bleeding ulcers like there sometimes is with prolonged bute usage. If you want to read more about SURPASS I found a pdf that mentions SURPASS in interviews of veterinarians talking about their treatments for degererative joints here.

We also tried a new injection series of shots of Chondroprotec. This was another treatment I was unfamiliar with. It is suppose to work similar to Adequan (which is glucosamine) but when I looked it up on the Internet it was described as being used on burns or wounds. Apparently it has a secondary use of helping with arthritis.

In any case, our vet wanted us to try the Chondroprotec and so we gave our mare a shot once every 4 days for the first month and then 1 to 2 times a month thereafter.

We did a month of injections. I couldn’t see much difference in her. From what I have read, this treatment may be more effective in early stages of arthritis. My horse’s case is advanced.

We decided to go back to the monthly Legend injections. We did see some improvement after we started it. If you’re not familiar with Legend, it is Hyaluronic acid. My understanding is this is what the body uses to create the fluid in the joints.

Something else we have done for my mare from time to time is for my friend who is a massage therapist to work on her. I have seen where that has seriously improved some horses. The barn I was at for a while had a equine chiropractor in regularly.

Since my mare can no longer move well enough to defend herself or even move out of the harms way, I have decided to keep her segregated from the main herd. I did move my most laid back herd member in with her for company. Having a buddy seems to keep her from pouting and I see the two of them grazing together in the field, so apparently they get along reasonably well.

I know with some of these joint medicines it takes a month or so for the effects to show. She has been on a glucosamine supplement for five years now. About a month after starting her on it I did see a bit of an improvement in her arthritis, but over the same period her arthritis has spread and become more severe. I am afraid to take her off the supplements at this point because I’m afraid she’d be worse without them. I have the feeling that none of the arthritis treatments by themselves work miracles, but together each one is contributing a small amount to help the mare to continue to live an active life.

Helpful Products for Your Senior Horse

The following books and supplements are resources for to help keep your older horse happy and healthy. The books give practical advice and describe symptoms of ailments to watch for in the elderly horse. I highly recommend them if you have an older horse in your pasture. I’m also a big believer in joint supplements. I believe they have helped stretch the riding time of my horses.