Now don’t get me wrong, I love all horses, but there’s just something magical about a Friesian horse. Whenever I make this comment I’m usually met with the rolling of my husband’s eyes and a sigh, followed by a “Yes dear.” What can I say, I’ve been in love with this horse breed for over 16 years. 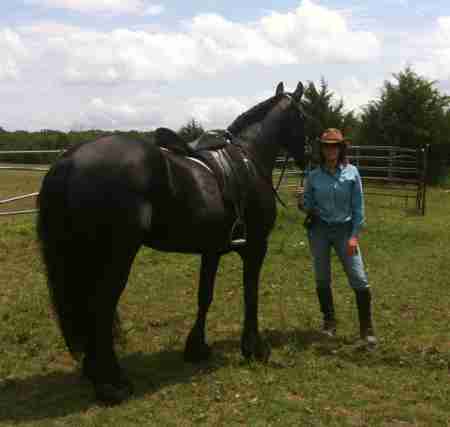 My beautiful Friesian mare and I heading out on a trail ride. 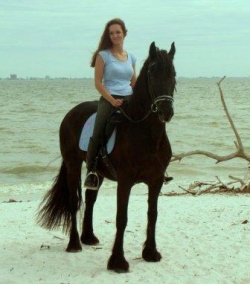 The first time I saw one of these magnificent creatures was in Holland where I went to live and find myself in 1990. I was walking along a remote beach on the North Sea near Den Haag when the most beautiful black horse with long flowing mane and tail cantered by me. It was instant love and I was totally captivated. I had never witnessed such an amazing horse. I started hitting the beach everyday after that and eventually I ran into the black horse again. This time I stopped the rider and talked with her about her horse. I’m sure she thought I was some quack tourist, but she was a great ambassador for the breed and took the time to tell me the breed’s rich history.

Friesian’s are an original Dutch breed of horse. They get their name from the Dutch province of Friesland where the breed originated. Shortly after being introduced to the breed I took a road trip to Friesland and found myself watching for Friesians in the land they made famous.

Friesians have an ancient and proud history. Their strength and size made them excellent war horses. I realized as I was petting the horse on the beach that this was the horse Julius Caesar, King Arthur, and Lancelot all rode – this was a noble breed.

Jump ahead 10 years I’m at Equitanna in Kentucky. Friesian mania has hit the US. I along with many other Friesian fans drool over the Friesian dressage demonstrations. These magical horses can dance with the grace of a ballerina. In addition to dressage, Friesians excel as carriage horses due to their high stepping action and impressive stature. 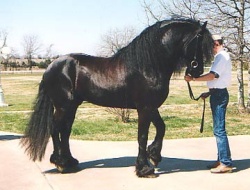 Today Friesians are one of the most popular and “in demand” horses in the country. Their distinctive black color, luxuriant manes and tails, and flashy feathers make them stand out from other horses. Their gentle temperament and intelligence add to their allure. People are drawn to their expressive eyes and elegant looks. Yet, they are also powerful versatile athletes willing to please.

Friesians are large horses with an average Friesian ranging between 15.2 to 16 hands high. Their average weight is around 1300 pounds. They excel in driving and dressage, but they are also great all around horses. Their easy going dispositions make them great family and trail horses. 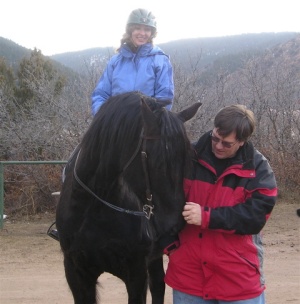 Picture: Me trail riding a friesian in Colorado. Friesians are famous as dressage and carriage horses, but their sensible natures also make them great trail horses.

Today there are Friesian horse breeders in almost every state. The main breed association in the New World is the Friesian Horse Association of North America. There is also a nonprofit organization. the Friesian Horse Society, that has the mission to promote and preserve the Friesian horse through strict registration standards. Because the breed was almost lost in the past – at one time there were only 3 pure blooded stallions left, breeding standards are very strict and rigorous. To comply with the
Dutch breeding registry, approved mares can only be bred with approved stallions. In fact breeding an approved mare to a non-approved stallion can result in the mare’s papers being revoked from the Dutch Registry.

Despite these harsh regulations, there are several sport breed associations that cross Friesians with other breeds. Some of the more popular associations are:

Friesians are natural show horses and have been featured in many movies including “Ladyhawke,” “Mask of Zorro,” “Interview with a Vampire,” “Sense and Sensibility,” “Emma,” and “Disney’s-Tall Tales.” Many have credited the 1985 movie Ladyhawke where Michelle Pfeiffer rides the gorgeous Friesian stallion Goliath, as being a major influence on the breed’s popularity in the U.S. In the 2004 movie Alexander (starring Colin Farrell). an amazing Friesian stallion was selected to play Alexander the Great’s legendary horse Bucephalus. If you have a friesian or another black horse and need ideas on what to call the horse, check out our name article that includes a section on black horse names.

One note of interest – when we first bought our barn, there was a horse celebrity living in it. The Friesian horse who had been used for all the rearing scenes in the Zorro movie lived at our barn. The picture below is him saying hello. 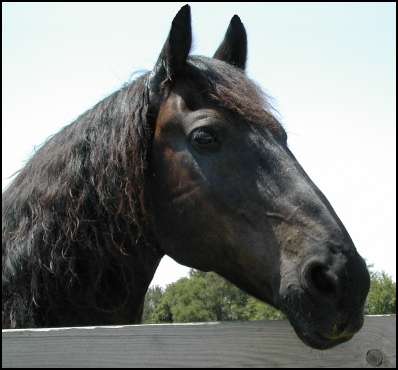 Want to see more beautiful pictures of Friesians? Check out the pictures from the Friesian Horse Keuring held in Ft Collns, Colorado.

Friesian horses are incredibly beautiful and have a loyal following. Here are a couple of gift ideas you might consider for the Friesian nut in your life.